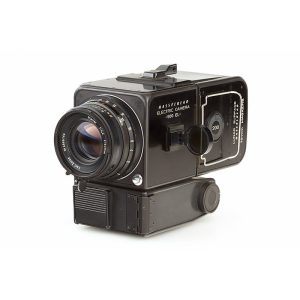 Early modified 500 EL/M with black anodised finish, produced for the Apollo Lunar missions. It is from the first generation NASA motor driven cameras that shot the first images on the surface of the moon. With some other modifications the camera mirror was removed to reduce the camera weight. A special large locking mechanism was added in order to change film magazines with bulky space gloves on. Similarly a larger sturdier shutter release plate has been added to the camera. It comes with a special NASA Planar 2.8/80mm no.4865144 with matching black anodised finish with control tabs, also designed for use with space gloves, a 70mm 200-exposure magazine no.TR400073 engraved: LUNAR SURFACE.P/N SEB 33100082-201 S/N 109, with the special NASA dark slide, in total only 29 cameras of this type were produced for NASA, camera and lens in beautiful, original condition, also included is a brass medal: 1969-1979 TEN YEARS ON THE MOON July 20th, 1969 'WE CAME IN PEACE FOR ALL MANKIND', in blue box with velvet inlet. 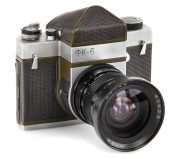