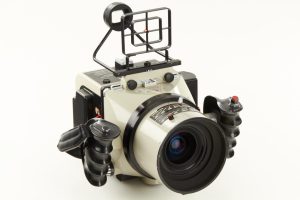 Aerial Linhof Aero Technika 45 camera with Aero Rollex 4x5, standard 4x5" back, wire frame finder. Aero Technika is the preferred tool for commercial, industrial and military photographers looking for a large capacity heavy-duty hand-held camera system capable of delivering brilliant aerial pictures with maximum sharpness and all the richness of detail and the wealth of information that only 4x5" film can provide. While the camera is primarily used for air-to-ground photography, it can also be used for air-to-air shots, as all Aero Technika lenses (except the 90mm lens)are supplied in helical focusing mounts to ensure optimum sharpness also at closer distances.

Some of the cameras were used by NASA/ESA space missions. The original Aero Technika was developed in 1972/73. It uses 126mm roll film with motorized film advance. The film cassettes are for 150 exposures. A vacuum film cassette holder keeps film exactly flat in the focal plane. Interchangeable lenses with focal lengths between 75mm and 250mm as each lens have it's own shutter.

One of the largest TLR cameras