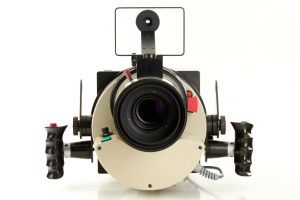 Aerial Linhof Aerotronica 69 camera that shoots 6×9cm images on 70 mm film in a special motorized magazine / data-back, allowing 320 exposures in one load. Lenses from 75 to 480 mm in focal length can be mounted by means of an adjustable lens-tube.

The camera relies on an innovative focal-plane shutter, composed of two discs, each with a slit, rotating continuously at slightly different speeds. A third shutter covers the rotating discs, and is opened to allow an exposure. The speed of the rotation of both discs is adjustable, giving a range of six speeds between 1/500 and 1/1500 second.

The camera has a frame-finder, with red and green LED indicator lamps in the eyepiece loop, indicating the state of readiness of the camera.

Aerial Linhof Aerotronica 69 can be powered by mains electricity or a battery pack.