Carl Zeiss was founded in Jena in 1846 and grew to be the most dominant optical and fine mechanical firm in the world at the beginning of the twentieth century through 1945. It was then effectively separated into two firms because of the partitioning of Germany after World War II.
The resulting firms became Carl Zeiss in Oberkochen (West Germany) and VEB Carl Zeiss Jena (East Germany).

In 1945, the upper echelon of the Carl Zeiss Jena scientists and their most senior management were taken from Jena by the US Army to the small town of Heidenheim in what would be West Germany. After a year of having no manufacturing resources and their managers sent to England for denazification, the company began to reform itself in the non-Russian zones of occupation from scratch. They applied their knowledge to totally new products since they had no established product line. These resultant products were years ahead of the industry. They reestablished the old products of microscopes, binoculars, planetariums among others and became profitable by 1954.

The remnants of the prewar firm were decimated by the loss of senior staff and management to West Germany. The total assets of the firm were dismantled and sent to the USSR and restarted itself in Jena based on the products designed before the war. They had to supply Russia with senior technical staff to start the new Russian industries based on their former lines of business.. While most of these advisors were gone for 4-5 years or more, the firm was restarted from scratch as well in 1947/8. VEB stands for "Peoples Owned Enterprise." After the collapse of the Soviet bloc, the firm lost their customer base as was dissolved or portions sold off to successful Western firms.

one of the fastest practical camera lenses ever made 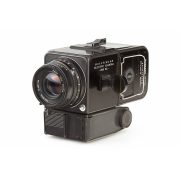